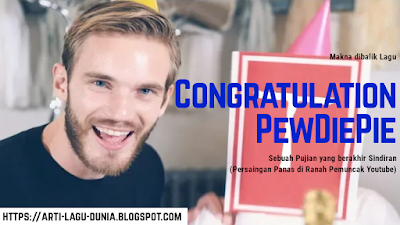 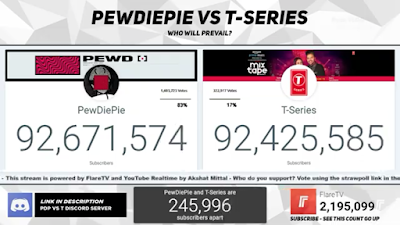 
Incredible job!
I know we had our differences
But today, I just wanna tell you

[Verse 1: PewDiePie]
Ayy, congratulations to your corporation
Guess to beat one Swedish boy you need a billion Asians
Yeah, you did it very nice, and all it took
Was a massive corporate entity with every song in Bollywood
Now you're at number one, hope you did nothing wrong
Like starting your business by selling pirated songs

Oops! Didn't think we'd see? It's right there on Wikipedia


Get used to your past being held against you by the media
I'm sure right now there's nothing that you're doing that's illegal, yeah
I'm certain that you haven't had collusions with the mafia

[Verse 2: PewDiePie & Boyinaband]
I got a letter in the post, hmm, what is this?
T-Series saying, "cease and desist"
Had a problem with me telling them to "hold their defecation"
But, let me educate you silly, that's not defamation (Woo)
T-Series can eat a dick! (Still not defamation)
Suck my fucking Swedish meatballs! (Still not defamation)
Did you know that Indians have poo-poo in their brains?
That's a blatant racist lie
Yeah, but still not defamation!
India got YouTube figured out, that's sick, son
How 'bout next you figure how to fix the caste system? (Oof)

Maybe all those ads will solve your crippling poverty
But looking at T-Series' past, I'm guessing not probably
But never mind the poor people, we just here to party
Just hit up, pop some bottles with the nine-year-old army

Non-alcoholic 'cause I had a real problem


But we still out there, live it like we 'bout to kamikaze

[Bridge: PewDiePie]
So this is it, thanks for sticking with my channel
Ever since I was a nobody, screaming at barrels
Yeah, this is it, it's been an adventure
It's the end of the reign of Felix Arvid Ulf Kjellberg
Through all the change and controversy
You've been by my side
There's no army in the world
I would rather give me watch time
It's been a wild ride, so while I can still be heard
Here's one last brofist from the number one in the world